The Great American Trail Horse Sale offered a variety of horses, from quarter horses and mules, to Friesian Sport Horses and Percheron crosses and ponies. There were horses with star-studded pedigrees, and ones with no pedigrees at all. Polka-dotted appaloosas and multiple shades of buckskin, dun, palomino and roan colored the choices. But for all their differences, what they did have in common is that they were broke, broke, broke. And because of their training, registration papers or not, several horses sold for more than $10,000.

Some of the sale’s top sellers included: 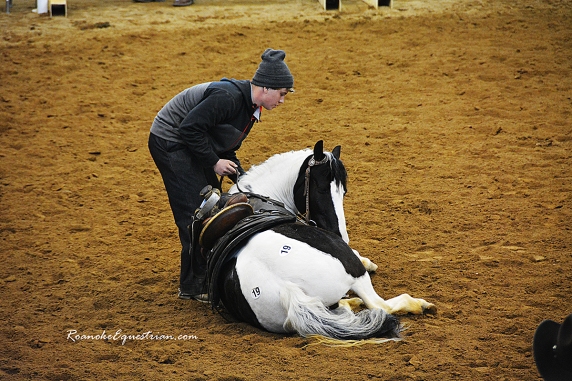 A roan pony lies on the ground while a horse was sidepassed over him and a bullwhip cracked over his body.

This palomino did not sell.

The sale was filled with sellers trying to demonstrate just how broke their horses were. Some had the help of children to ride their horses around the arena. Some stood up in the saddle. Others got the horses to lie down while cracking bullwhips around their heads. At this sale, being broke was much more impressive to the crowd than having good breeding.

While the sale captured good prices for many horses, there were also a large number that didn’t sell. One buckskin gelding reached a bid of more than $17,000 but the owner said they were no where close to what the horse was worth and shook their head for a “no sale.” Every mule except one that went through the sale didn’t reach the reserve set by the owner. The one that did sell went for $3,700.

That doesn’t mean there weren’t deals to be had. A sweet, quiet Cremello AQHA mare sold for $2,400. And a really nicely made Mustang mare who had placed fifth in a Mustang Makeover event, sold for $1,900.

Despite it being a trail horse sale, and the popularity of gaited horses among trail riders, there were only a few gaited horses in the sale and they didn’t sell for as high a price as the ranch-type horses. A little chestnut Rocky Mountain Horse sold for $700, and a “Single Footing Horse” sold for $2,800. A bay Kentucky Mountain Horse who was the crowd favorite in the rack-off the night before sold for $5,200.

If the Great American Trail Horse Sale shows horse owners anything, it should be that investment in training and giving your horse a job is worth it. Broke horses are needed and wanted.