He was a National Champion in Arabian Western Pleasure in 1975, National Reserve Champion Arabian Ladies Side Saddle in 1976, and U.S. Top Ten Arabian English Pleasure in both 1975 and 1976. He won more than 50 championships and 20 reserve championships in his seven-year show career and was high point winner of the prestigious King Saud Trophy. But it was his role as Shêtân in “The Black Stallion” that made Arabian stallion Cass Ole an icon. 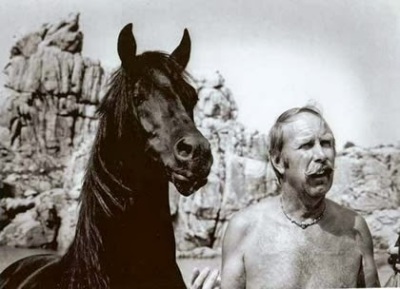 What horse lover will ever forget the scenes on the beach, watching the gorgeous black Arabian gallop across the white island sand? Who needs Brad Pitt or Johnny Depp as a leading man when there is such a horse to play the leading role? Director Carroll Ballard traveled all over the world looking for the right horse to play “the Black” from Walter Farley’s beloved 1947 book. But it was in Texas, on Farley’s recommendation, that Ballard would find the perfect stallion to bring the story to life. Cass Ole was naturally black, except for a star and white socks. Those were dyed away for the movie. He was also given a weaved-in mane to help him look wilder.And it was his wonderful manners and trainability that sealed his fate as “The Black Stallion.”

Because Cass Ole was such a valuable show horse, he had several stunt doubles to perform the more grueling parts of filming. Cass Ole still completed 80 percent of the filming himself and proved to be quite versatile — able to look wild and furious toward his enemies, yet loving toward Alec. He would also appear in the movies sequel, “The Black Stallion Returns.”
After his life as a Hollywood star, Cass Ole returned to the show pen where he continued to win local and regional titles. He was also a successful sire with 123 foals.
https://youtube.googleapis.com/v/8GlZJ4wVLdA&source=uds
https://youtube.googleapis.com/v/Lkf4BpqbCYU&source=uds