Sandra Morgan‘s good luck and dream of owning multiple World and Congress champion Good I Will Be has come to an end.

Morgan announced Monday, Nov. 11, that the 2004 bay stallion was euthanized after undergoing surgery for a kidney stone at Texas A&M University.

Willy became a bit of a celebrity after being purchased by Morgan at the Rita Crundwell sale. He was the first horse sold at the sale and was bought for $775,000. Morgan had won $35.7 million in the Canadian Lottery in May of 2011.

(Willy’s former owner, Crundwell, was convicted of embezzling about $53 million from the town of Dixon, Ill., where she was the comptroller and treasurer over a 22-year period. Crundwell was one of the top quarter horse breeders with her horses winning 52 world championships.)

After his purchase at the Crundwell sale, Willy posed for hours at the 2012 Quarter Horse Congress as his many adoring fans took photos with the bay stallion. “Before now, people may have thought Willy was inaccessible, but with his new home, ownership and marketing campaign, we want to make sure that everybody knows that he is everybody’s horse,” Stephen Stephens, owner of Dry River Ranch, told GoHorseShow.com in 2012. 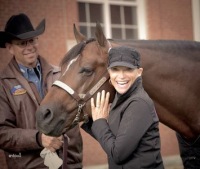 “He is just eight years-old and he has already sired several futurity champions and we are looking forward to continuing his breeding career,” Stephens said after the sale. “I am blessed to be given the opportunity to stand such a talented stallion.” He was standing at Dry River Ranch for a 2014 stud fee of $2,500.