A rare opportunity to learn from two of the nation’s most notable horseman — renowned trainers Bucky Reynolds and Jack Towell — will come to the Virginia Horse Center on Aug. 24-25 at a clinic titled “How to Improve Your Performance in the Show Ring.”

The clinic will offer sections for riders at 2’6″, 3′, and 3’3″, with each section being offered both days.
Rider reservations are accepted on a strictly first come, first served basis with a limit of 8 riders persection. Reservations can be made using the reservation form found here.
Each two-hour session will incorporate flat work, jumping exercises and course work. Each session is followed by an open session allowing riders to ask Reynolds and Towell questions as trainers and judges about any aspect of riding and showing. Each session costs $175 per rider or $300 for both days. It includes lunch. Auditors are also welcome to register at $20 per person. An accompanying auditor is free. Space is limited and the deadline is Aug. 7.
Reynolds is a well-known, highly respected hunter/jumper trainer and judge. He has trained and ridden some of the most notable show hunters in the nation including Henry the Hawk, Square Lake, Stocking Stuffer, Garbiel and Gozzi. He also trained national champions in the amateur owners with his sister, Betty Oare, riding Estrella. Reynolds has judged every major horse show in the United States including the National Horse Show, the Devon Horse Show and the Pennsylvania National, and he is a member of the VHSA Hall of Fame.
Towell is one of the only trainers in the country to train a champion or reserve champion in every division at the year-end fall indoor horse shows. He has been named the Leading Junior Hunter Trainer of the World Champion Junior Hunter Rider association. Towell’s students have been named Best Child Rider at Devon and the fall indoor shows 18 times. He has trained the overall High Score Pony Hunter at the U.S. Pony Finals and the overall champion at the U.S. Junior Hunter Finals. Towell also judges some of the most prestigious horse shows in the country and has twice trained Brunello, ridden by daughter Liza Boyd, to the USHJA International Hunter Derby Championship. His son, Hardin, is a successful grand prix rider currently based in California. 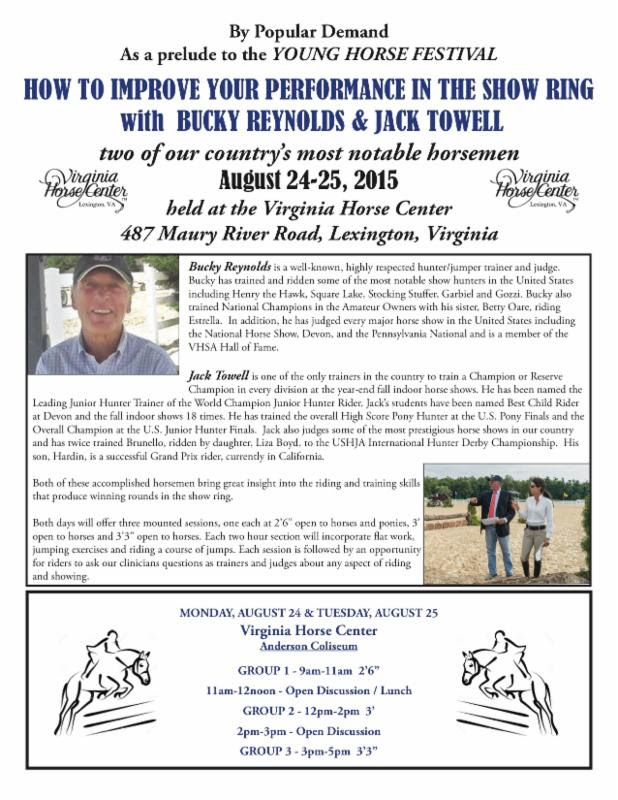