I attended the Friesian Grand Nationals this past weekend obviously expecting to see gorgeous black horses with their long manes and tails blowing in the breeze as they thundered around the Virginia Horse Center for what is their world championship show. What I did not expect to find was an event that illustrated what a show could and should be. But that’s what I found Oct. 4 in Lexington.

The announcer was excellent as he quipped jokes and even interviewed the leadline contestants as they awaited the judge’s placings. (Everyone won, as is usual for the class for the littlest equestrians.) And for each class, he announced each horse as it came into the arena, giving each entrance something a little extra flair. 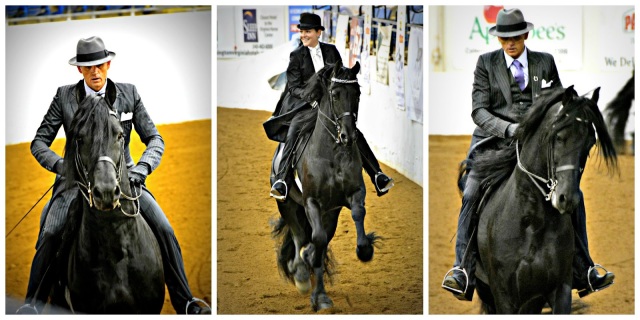 Perhaps the most engaging thing about the show (besides the competitors themselves, of course) was the music, showcasing a sense of humor that they weren’t afraid to use. They didn’t treat the classes like a hushed library, but played music over the sound system that went with the class. For the English Pleasure horses’ animated action, they played “Back in Black” and “Sexy and I Know It” as those proud black horses roared around the arena. It was nothing short of marvelous and you couldn’t help but smile and cheer. Meanwhile, for the next class, a driving class, the tempo changed to the nostalgic croonings of “Unforgettable” as the horses trotted in pulling carriages that were stunning in their elegant charm. Lanterns glowed at the sides, the drivers wore blankets over their legs, grooms sat in the back dressed in spotless finery, and I suddenly felt like I had been transported to another time in a blink of an eye. And during the dead-time of the arena drag, “She thinks my tractor’s sexy” brought a levity that somehow made the interruption less tiresome for those of us sitting in the stands.

For the shows that struggle to balance recognizing winners while also keeping a show moving along, the Grand Nationals seemed to have found a wonderful solution: reserve champion is called first. That horse then proudly goes and receives their ribbon while they call the champion. The others file out as they name the Top 5. Therefore the spectators know exactly who won, but the show still moves briskly along. And of course they have a victory pass for both the reserve and world champs.

I am torn about whether the dinner scheduled on the concourse of the Coliseum on Saturday evening was a plus or a negative. It must have been a wonderful community-building affair for the Friesian exhibitors at the show. But it certainly put a huge 3-hour gap in the day for spectators and I ended up taking my 8-year-old daughter back home to Roanoke rather than stay. I returned that evening while she stayed behind. I’m sorry now that she didn’t see the event.

The Friesian Grand Nationals is not a show I will soon  forget. For 2015 their world championships will be held in Los Angeles, California. But if they swing back around to Virginia again, it is a must-see for all horse lovers in the area. I know I will definitely be back.

More photos from the Friesian Grand Nationals will be posted soon here on The Roundup.

Official show photography was by Jon McCarthy Photography of Tulsa, Okla. Proofs will be posted at https://www.jonmccarthy.com/default.asp