Sgt. Reckless, a scrawny 14-hand mare who served in the Korean War and earned two Purple Hearts,was honored with a monument Friday, July 26, at Virginia’s National Museum of the Marine Corps in time to commemorate the 60th anniversary of the war’s end.

The horse earned the rank of Staff Sgt. after being purchased  in October 1952 for $250 from a Korean boy who sold her in order to buy an artificial leg for his sister who had lost hers to a land mine. She had a Korean name, but the Americans had trouble pronouncing it, so they named her after the platoon’s radio call sign. 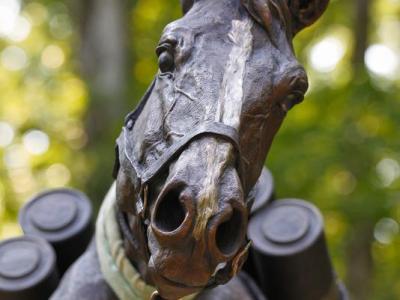 The horse bonded quickly with the Marines. She’d stick her nose in the tent where Marines were living and lumber in, said John Newsom, 77. “She’d eat almost anything,” Newsom said. “She loved Tootsie Rolls.”

The Marines also gave her some of their monthly beer allotment. In return, Reckless carried ammunition to the front lines and saved Marines’ lives.She carried her burdens without a handler, going back and forth by memory.

She earned her stripes, which were pinned to her horse blanket, after the battle for Vegas Hill, a firefight that raged for three days.

That day, Reckless made 51 trips up and down the hill, carrying four tons of shells to the front lines, and carrying wounded and dead Marines down from the battlefield.
At one time, she shielded four Marines on the trail. She was wounded by shrapnel not once, but twice that day.

The Marines taught her how to duck under barbed wire and how to lie flat if caught under fire in the open.
After the war, the Marines managed to bring Reckless to the United States, where she became a minor celebrity. She appeared on television, and magazine profiles were written about her.

“She wasn’t a horse, she was a Marine,” said Robin Hutton, whose book, “Sgt. Reckless, America’s War Horse,” will be published later this year. “When the Marines got her, they became her herd. She bonded with them and would do anything for them. She’d follow them anywhere and everywhere.”
The legend of Reckless spread, earning her a place among other four-legged legends like Lassie and Rin Tin Tin. But with time, that legend faded.

Reckless gave birth to three colts — named Fearless, Dauntless and Chesty — and a filly that died one month later.