Unbridled’s Song, the son of 1990 Kentucky Derby winner Unbridled who went on to capture a Breeders’ Cup race and become a prolific sire, died Friday. He was 20.

Taylor Made Stallions, where the horse stood his entire career, said in a statement that the stallion began showing acute neurological symptoms Thursday and was taken to Rood and Riddle Equine Hospital in Lexington, Ky. An MRI showed a large and inoperable mass in his sinus cavities and around the optic nerves. He was euthanized Friday, July 26.

“Unbridled’s Song was one of those great horses,” Taylor Made President and CEO Duncan Taylor said.

“He had it all — looks, pedigree, speed, and presence.
Our team loved him from the beginning.”

Unbridled’s Song was a $200,000 purchase at the 1994 Fasig-Tipton Saratoga selected yearling sale by Ernie Paragallo’s Paraneck Stable. He was then sold as a 2-year-old for $1.4 million at the Barretts March sale of 2-year-olds in training, with Taylor Made as agent, only to be bought back by Paragallo when sale buyer Hiroshi Fujita refused the sale after stating that his veterinarian found evidence of ankle bone chips.

As a 2-year-old, Unbridled’s Song won the Breeders’ Cup Juvenile. The next year, he won the Florida Derby and Wood Memorial. He was the 7-2 favorite in the 1996 Kentucky Derby but finished fifth while another Unbridled colt, Grindstone, took the roses. Unbridled’s Song’s career ended prematurely in 1997, when he suffered a broken cannon bone while training for the Donn Handicap. 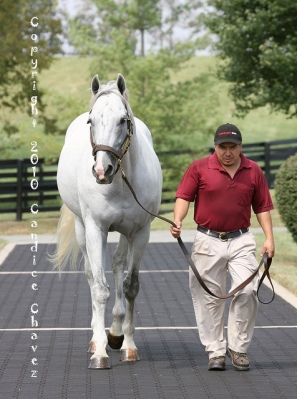