Phoenix, a 16-year-old palomino gelding owned by Carol Pugh, is getting national attention online after a bad choice left him stranded in the hayloft of his Botetourt County barn over the weekend.

His owners tried unsuccessfully to lead him back down the stairs after finding him stranded upstairs. Nothing they tried would convince Phoenix to go back down those stairs that they figure he scurried up in an attempt to get away from a herdmate he had gotten into a disagreement with.

After several hours of trying to get the horse down the stairs, the owner called in extra help. Botetourt County’s animal control has training in large animal rescue, but they don’t have all the equipment required. So Little Fork Volunteer Technical Large Animal Rescue Team was called to help with getting Phoenix out of his predicament.

While awaiting the rescue team to arrive, the owner also contacted Dr. Tarah Satalino of Windover Equine Services and took Phoenix feed and water and keep him calm while the team traveled the three-hour drive to the farm in Blue Ridge, Virginia. 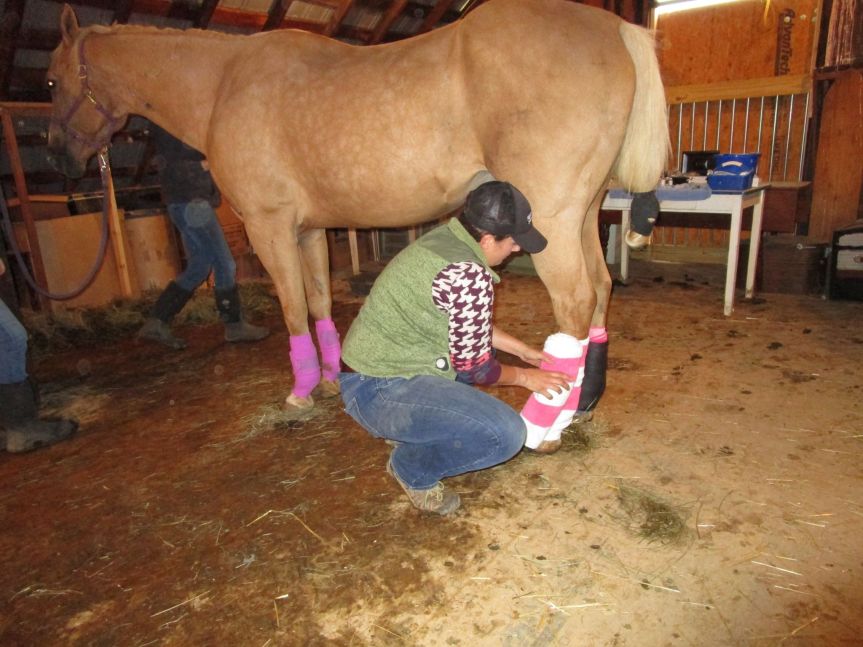 After arriving at the farm, the team called for assistance from the local fire and rescue crews and animal control officers. Dr. Satalino also arrived and was briefed on what was needed. Assistance arrived from three Botetourt County animal control officers, seven FF/EMS personal from Botetourt County Fire and Rescue and three firefighters from the Blue Ridge Volunteer Fire Company.

The team formed a plan to move a sedated Phoenix onto a rescue glide and slide him and the glide down the steps and outside to safety. The team set up 2-ton chain hoist by chaining it to one of the main posts that supported the building. A secondary safety system was rigged using a rope and pulley system. This system was anchored to a different large structural posts further back in the barn near the rear wall. Once the rigging was complete, the team performed a “dry run” of the system to be sure that it would work.

Dr. Satalino administered ketamine in a dosage that would be used for surgery so there would be no chance that Phoenix would struggle during the rescue.The team was concerned that Phoenix might slide off the rescue glide once on the stairway, so they rigged him to the board as securely as possible using carabiners and webbing.

Once heavily sedated the horse was moved onto the rescue glide and it was pulled to the head of the stairwell. This took some time and Dr. Satalino advised that we needed to move quickly. It was decided to disconnect the chain hoist system and to use the rope system for lowering. Four people pulled the glide down the stairs with the rest of the crew operating the rope system. As Phoenix started down the stairs the hobbled legs were drawn towards his body and there was just enough room for him to slide down on his side. His front hoofs hung up partway down and as expected he slid down near the bottom of the board but did not come off of it. At the bottom he was turned on his back for a short amount of time so that he could be pulled through the doorway and outside to safety.

Once outside the rigging and equipment were removed and Phoenix tried to stand. He stumbled around and fell to the ground in respiratory arrest. The vet performed an emergency tracheotomy and Phoenix began to breath again and was eventually moved back inside.

Phoenix is now OK and that the trach tube has been removed.

The incident has renewed calls to help get Botetourt County Animal Control the equipment needed to perform large animal rescues.