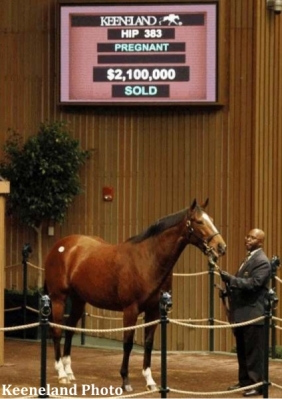 For many, buying a horse at an auction can be a nerve-wracking experience. Each horse is scrutinized by prospective owners trying to determine what may be wrong with that animal. Generally, the lower the price, the more likely something may be wrong. But what about a $2.1 million broodmare?

At the 2011 Keeneland November Breeding Stock Sale, Love Me Only an unraced half-sister to European Horse of the Year Giant’s Causeway in foal to European Horse of the Year Sea the Stars, was sold. A complaint filed in Kentucky’s Fayette Circuit Court Jan. 27, 2012 claims that her owners and consignor were aware that she may have had laminitis when she entered the sale ring.

The mare was consigned on behalf of a group of owners affiliated with Coolmore, which owns Ashford Stud in Versailles, Ky., where Love Me Only stayed for about six weeks before the sale.

On the morning of Nov. 12, 2011, Summer Wind’s regular veterinarian, Dr. Scott Pierce issued a report stating “X-rays and clinical signs indicated chronic laminitis.” On Nov. 14 the complaint says, a second veterinary report, from Dr. Bryan Fraley said Love Me Only “had an acute episode of laminitis in which (her) coffin bone had significantly sunk.” Fraley’s report expressed “concern about the longevity of Love Me Only as a broodmare.”

Summer Wind immediately notified Keeneland it intended to reject the purchase, but
Keeneland said it would not rescind the sale. According to the Conditions of Sale, buyers must state their intention to reject a sale based on a published limited warranty within 24 hours after the session in which the horse is sold and before it leaves the sale grounds. In the meantime, Summer Wind learned that Love Me Only had been administered the pain killer Butazolidin five times between Nov. 5- 8. A blood sample from Love Me Only was sent to the University of California-Davis and confirmed “large quantities of Bute,” the complaint says.

However, Love Me Only was subsequently inspected on behalf of the defendants by Dr. Ric Redden and found to be “perfectly sound.” Defendants claim veterinary records prior to the sale demonstrate the absence of laminitis.

The mare delivered a 2012 Sea the Stars foal, inspected on behalf of the defendants by Dr. Ben Stivers and found to be healthy. She was bred back to Distorted Humor.