Twenty horses are set to go in the Kentucky Derby at Churchill Downs and Shug McGaughey’s colt, Orb, very well may be the Derby favorite come post time Saturday. Coming off a four-race win streak, the bay colt is taking to the track well with a strong workout on Monday that has many talking.

Orb is bred to handle the 10-furlong trip. A grandson of A.P. Indy and Unbridled, he is undefeated around two turns. In both the Fountain of Youth Stakes and the Florida Derby, Orb ran his opposition down in the final furlong and won going away. He prefers to sit near the back of the pack and close in the stretch. But he has also shown that he’s able to sit closer to the leaders if there is a slow pace. 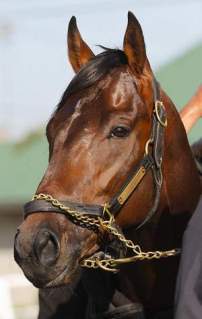 Orb has plenty of experience backing him up. He is owned by Stuart S. Janney III and the Phipps Stable, who have been among the bluest of the blue-bloods of American racing for almost a century. Mrs. Henry Carnegie Phipps raced Bold Ruler under the purple and gold colors of Wheatley Stable in the 1950s. Her son, Ogden Phipps, owned and raced Buckpasser during the following decade. Janney’s parents raced the great filly Ruffian.

For 28 years, the Phipps horses have been trained by Hall of Fame member, Shug McGaughey III.  He is no stranger to preparing some of racing’s superstars for big races, including Easy Goer and Personal Ensign. However neither McGaughey or the colt’s owners has ever won the Derby. Orb would be just the second Derby starter for McGaughey since he saddled Easy Goer to a runner-up finish behind Sunday Silence in 1989. His other horse, Awe Inspiring, finished third that year.

Orb is also impressing other trainers around the track.Bob Baffert, himself a Hall of Fame trainer and a three-time Derby winner, said, “I love the way Orb moves over the ground. He just floats. He looks the part.”

Orb will be ridden by Joel Rosario, 28. This is his fourth Derby mount, with his best finish being fourth on long shot Make Music for Me in 2010.