Skip to content
The Roanoke Shenandoah Valley Horse Show returned to the Virginia Horse Center on June 21-25. And while high-steppin’ horses took to the Coliseum to compete for top honors, there were no high jumps in a chase for a title.

While technically this is a continuation of the show once run by the Roanoke Valley Horseman’s Association at the Salem Civic Center and hosted by the Virginia Horse Center in 2016, the show is now under new management, R.H. Bennett, of Shelbyville, Kentucky.

The 2017 show was a very different affair than what fans will remember from 1972-2014. The hunter/jumper classes that were at the heart of the multi-breed Salem show are no more. Nor are the barrels or Western classes that were traditionally held on Monday. And fans would not find a Grand Prix of Roanoke to cap the event on Saturday night. This year’s show showcased only American Saddlebreds.

The show, begun in 1972, has been granted United States Equestrian Federation designation as a USEF Heritage Competition. The designation is only given to those competitions that have made substantial contributions toward the development of the sport, promote and practice equestrian ideals of sportsmanship, and have been established for a long period of time.

For 2017, there were 103 classes. Horses come from far and wide with  23 states represented. Spectators were admitted at no charge. The Salem show sold tickets to its evening classes.

During this year’s competition, Ceil Wheeler and her own Callaway’s Brioni took home the championship in the ASB Ladies Five Gaited Championship. The reserve champion was presented to Phyllis Brookshire aboard Man on the Move.

In the Hackney Pony Pleasure Adult Championship, it was Toni Nastali aboard Sandra Surber’s Heartland Resplendent that received the tricolor. The reserve champion in the Hackney division went Patty Hylton riding her own, Crystal Creek’s Legacy.

The ASB Five Gaited Jackpot was dedicated to Matt Shiflet’s grandfather, Claude Shiflet, a trainer whose family has been coming to the Roanoke Valley Horse Show from the beginning. The Shiflet family was honored before the class.

The Grand Prix of Roanoke had a new venue and a new champion for 2016, as Brooke Kemper rode her 12-year-old Holsteiner/Thoroughbred gelding Classified to the top spot for the $25,000 prize Saturday, June 26, at the Virginia Horse Center.

The 12-time winner of the Grand Prix of Roanoke, Aaron Vale, was not part of the field of 11 at the show’s new venue at the Virginia Horse Center.

As a large crowd of spectators looked on, Kemper, of Shadow Pond Stables in Culpeper, Virginia, was clear in her first ride and then clear again in the jump-off with a time of 37.258. She just barely edged out Maryann Charles and FVF Sailorman, who jumped a double clear with a time of 37.279.

Also in the jump-off round was Tyler Smith riding Soho D’Ermisserie, who had a double clear with a time of 41.763, and Gavin Moylan riding Pernod, who had four faults and a time of 35.411. 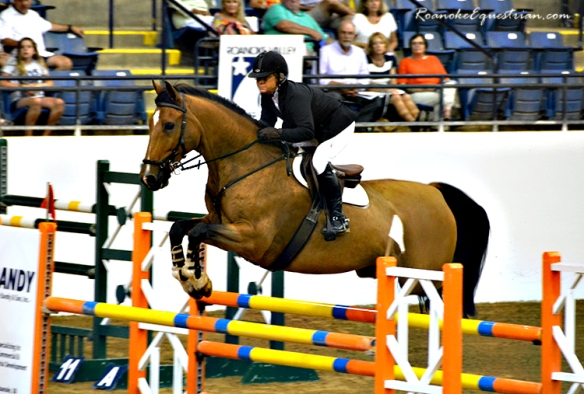 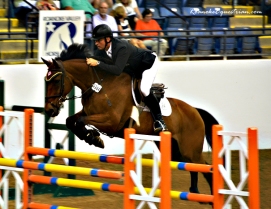 Brooke Kemper also rode Classified to a win in the Rockbridge Grand Prix at the Virginia Horse Center in 2015. She was third in the George L. Ohrstrom Grand Prix at the horse center in May. Kemper grew up on her parents’ Kemper Knoll Farm near Harrisonburg, Virginia. Her mother, Darlene, is a riding instructor, while her father, Whit, is a full-time farmer.

The Roanoke Valley Horse Show has found a new home at the Virginia Horse Center, and the horseman’s association is excited for this year’s competition from June 20-25. Highlight events during the multi-discipline event for exhibitors and spectators will include the $25,000 Grand Prix of Roanoke on Saturday, June 25, and the $5,000 USHJA National Hunter Derby presented by Chatham Hall on Friday, June 24.

“We’re excited to be moving to the Virginia Horse Center because it gives us the ability to offer more classes, and it also helps our great staff of volunteers in not having to actually build a venue as we did at our previous location,” Roanoke Valley Horse Show chairperson Stacey Wright said.

“A new addition this year will be all-day barrel racing on Monday with $2,500 added prize money instead of an invitational, as it has been in the past,” Wright explained. “We are hopeful that our move to the Virginia Horse Center will allow us to grow some of our other classes in the future such as our Arabian division, our Racking Horse division, our Saddlebred/Hackney/Roadster division as well as our Quarter Horse and Hunter/Jumper divisions.”

The Roanoke Valley Horse Show is a nonprofit organization and event, and the funds raised from the annual horse show are donated to health and human service organizations in the region. While the horse show will be moving to Lexington, the event will continue to benefit the Roanoke Valley and to uphold the show’s longstanding traditions of Southern hospitality.

“We are really looking forward to moving to the Virginia Horse Center and feel that it will be a great improvement in safety for our horses and our exhibitors as well,” Wright said. “It will allow us to grow our profits so we can contribute back to the charitable organizations that we support such as the Bradley Free Clinic 4-H and the Virginia Maryland Equine Program at Virginia Tech. It’s still the same great horse show, just in a new location. We are there for the benefit of the charities in the Roanoke Valley and that’s where our profits go, back to the Roanoke Valley,” Wright emphasized.

Besides his work at Hollins, Gerald was a well respected course designer and USEF “R” judge; was awarded the Virginia Horse Show Association’s Susan H. Hagan Memorial Trophy; was a seven-time ODAC Coach of the Year; was inducted into the Southwest Virginia Hunter/Jumper Association Hall of Fame in 2006; was the VHSA Horseman of the Year in 2006 and 1992 (making him only the second person in the history of the VHSA to earn the honor a second time) and also was inducted into the Roanoke Valley Horse Show Hall of Fame in 2015.

“The Roanoke Valley Horsemen’s Association along with the Roanoke Valley Horse Show were shocked and greatly saddened by the sudden loss of our very dear friend LM Sandy Gerald. He has been a great asset to our association and show for many many years, but more importantly he was a very dear friend who was above all else a true Southern Gentleman. His absence will be felt for many years to come. Out thoughts and prayers are with His family, His Hollins family, his friends, and the hundreds of riding students he has impacted over the years.”

He is reported to have fallen while decorating  a jump at Hollins and later died while in surgery to repair a broken hip. 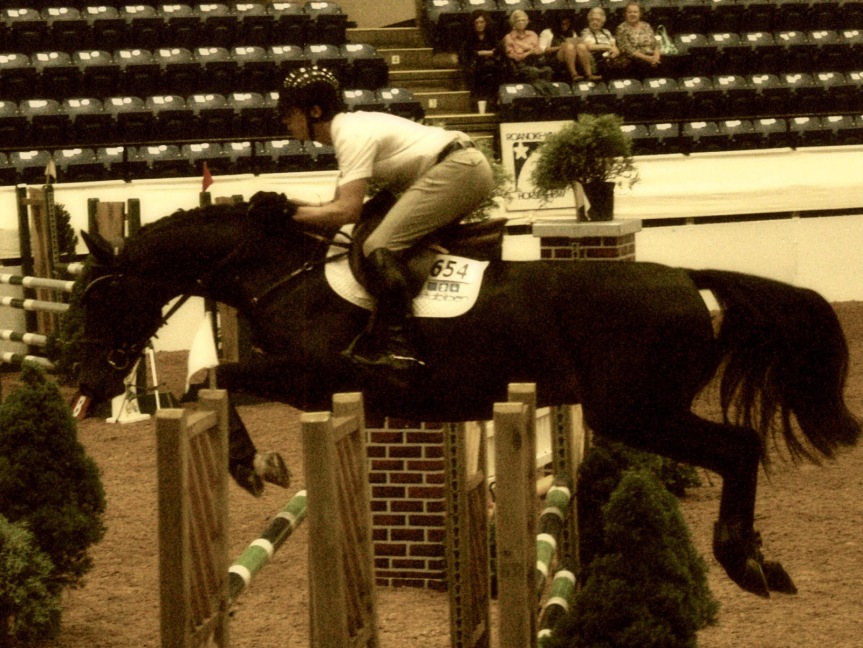 The show has just recently received approval to be held by the required horse show associations and can now move forward with planning and fundraising for the event, Roanoke Valley Horsemen’s Association board member Lynda McGarry told the Botetourt County Horsemen’s Assocation on Jan. 5 at its monthly meeting.

McGarry said there are plenty of changes in the works for the horse show, including dropping admission charges for spectators. The show will continue to be a multi-breed event.

The Roanoke Valley Horse Show facebook page also announced the new show location on Jan. 3: “New Year- New Location! The RVHA is excited to announce that the 2016 Roanoke Valley Horse Show will be held at the Virginia Horse Center June 20-25 2016! This could not have been possible without the help and dedication of our Show Chairman, Stacey Wright, managers Steve Kildow and Andrew Ellis and other members of the show committee. Although we will be at a new location, the Roanoke Valley Horsemen’s Association is committed to keeping this horse show’s charitable contributions coming back to the Roanoke Valley and traditions of southern hospitality at the top of our priority lists! Please mark your calendars to join us!”